The Greenstone Project is situated in the eastern part of the Beardmore-Geraldton Greenstone Belt.  This geological terrane is more than 130 kilometers long and forms part of the Wabigoon Subprovince of the Archean-age Superior Craton in the Canadian Shield. The Beardmore-Geraldton belt is mainly composed of volcanic and sedimentary rock formations that were deposited in an ancient coastal marine environment. Basaltic to andesitic lavas were deposited between 2,725 and 2,700 million years ago and were then overlain by a clastic sedimentary wedge where polymictic conglomerates and arkosic wackes grade up section and southwards into greywacke and siltstones interbedded with thin iron formations. Sediment deposition ended prior to 2,695 Ma with the onset of compressive tectonism1.

The Hardrock gold deposit is the product of an Archean mesothermal, epigenetic hydrothermal system that deposited gold in four basic types of mineralization in a number of different greenstone lithologies (greywacke, iron formation, albite porphyry). The deposit is centered on a complex of refolded folds where the axes of the main folds plunge at low angles to the west. The fold complex, as a whole, has undergone high strain brittle-ductile deformation and hydrothermal fluid flow appears to have been partly channeled through fractured rocks that developed in megascopic fold closures. 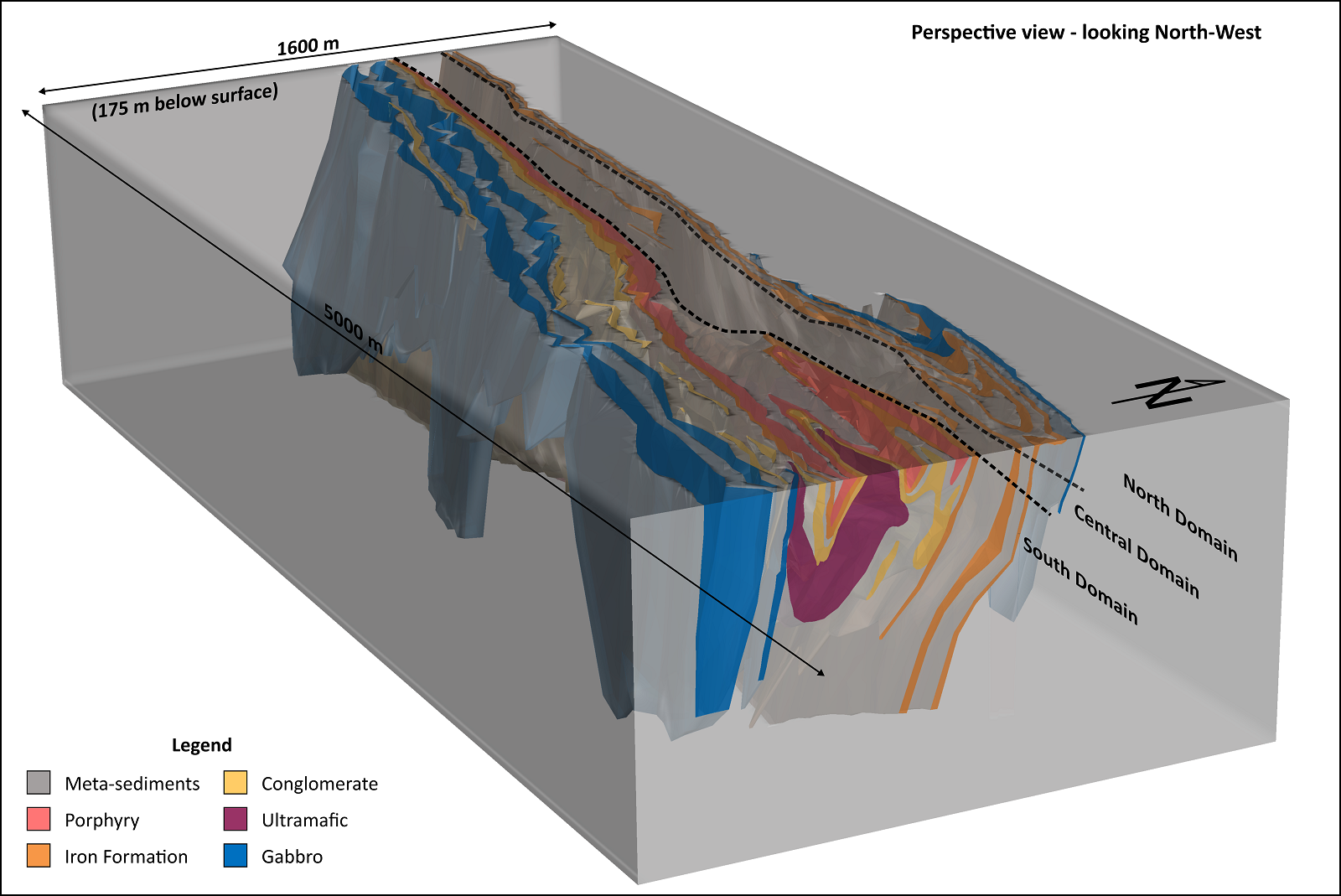 The rock formations of the Beardmore-Geraldton belt were affected by four regional deformation events. The first event, involving south-to-north compression, caused thrust-faulting and the imbrication of the volcanic and sedimentary formations and occurred between 2,694 and 2,690 Ma1. South-to-north shortening continued through the second deformation event, forming regional-scale, mainly west-plunging F2 folds and an axial-planar, steeply dipping S2 foliation that is well developed in the sedimentary rocks and somewhat less so in the belt’s volcanic and intrusive igneous rocks. Field evidence of the third deformation event is relatively scarce; where observed it indicates sinistral shearing along easterly trending planar zones of high strain. The fourth structural event in the tectonic evolution of the Beardmore-Geraldton belt involved dextral transpression and is best evidenced by minor Z-shaped drag folds.  Regional metamorphism that peaked during the latter stages of the tectonism reached medium-grade pressure-temperature conditions, causing the mafic volcanic and sedimentary rocks to be transformed into greenstones.

A key feature of the geology of the Project area is the intensity and complexity of folding that is displayed by a number of oxide-facies iron formations, a conglomerate unit and by a bedding-conformable albite porphyry intrusion. The limbs of these mappable folds dip steeply to the south, while fold axes plunge 15°-25° to the west. An antiformal fold known as the Hardrock Anticline is central to the Hardrock gold ore system. Foliated, fine-grained greywacke that is interbedded with the magnetite iron formations and which is intruded by the albite porphyry also shows tight folding across the Project area. A major west-northwesterly striking, brittle-ductile shear fault known as the Bankfield-Tombill Fault crosses the southern edge of the Project area. While this structure is regionally extensive, it is generally unmineralized and does not appear to have a genetic link to the Hardrock gold deposit.

The gold deposits of the Beardmore-Geraldton belt are examples of the orogenic, greenstone-hosted lode gold deposit class2. They formed at mesothermal levels in the crust, broadly 5-10 kilometers below surface, with their genesis being related to the regional tectonism that intensely folded the volcano-sedimentary rock package. Highly pressured, weakly saline, near-neutral waters at temperatures between 225°and 325°C, carrying dissolved silica, carbonate, and sulphur along with gold and other trace metals, migrated through crustal zones of relatively high permeability, typically shear zones and densely fractured rocks3. Gold deposition from these hydrothermal fluids is characteristically associated with the formation of quartz-carbonate ± sulphide veins and the replacement of rock-forming iron-rich minerals by iron sulphides.